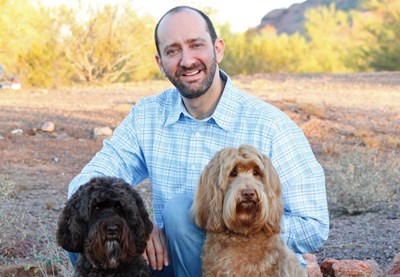 Bill Konigsberg is a YA novelist who has “a tendency to speak out.” He attributes this to his mother. “For better or worse, she taught me my emotions and my thoughts are important. There are pitfalls to that, but one of the really good things is that I feel very free to share my feelings.”

He did just last November at the Assembly on Literature for Adolescents of the National Council of Teachers of English (ALAN). At the conference he sat on a panel about disproportionately banned and challenged books and found himself strongly disagreeing with the opinions of another panelist. The next day he gave a speech during which he said, “LGBTQ youth are my kids. And I’m a fierce papa bear, and you do not come after LGBTQ youth. Let’s widen that. You do not come after marginalized kids. They, too, are my children.”

The night before the talk, he awoke at three in the morning. “I realized that the second half of my speech was all about vulnerability but that I was speaking about vulnerability without being vulnerable. It was all anger.” So he rewrote the talk. “It’s so counterintuitive, especially for a man in our society, but being open and real is exactly what is needed.”

Konigsberg’s characters certainly struggle with what it takes to be vulnerable; truth, openness and honesty are even represented in the titles of his books: OPENLY STRAIGHT, HONESTLY BEN, and THE PORCUPINE OF TRUTH. “The search for authenticity and how to express it is central to everything I’m doing. I suppose when I’m done figuring it out, I’ll be dead. It’s endlessly interesting to me.”

Like their creator, Konigsberg’s characters seek connections with themselves and with others. In OPENLY STRAIGHT, Rafe, the hero, breaks out of being a poster child for gayness when he presents himself as straight at his new boarding school so that he can discover who he really is. He connects with Ben, hero of Konigsberg’s companion book, HONESTLY BEN, who identifies as straight but “gay for Rafe.” Ben also struggles to understand himself and this dichotomy.

Konigsberg communicates with lots of young people who write to him. The hardest question he hears? “I want to come out to my parents. What should I do?” He always tells them, “Your safety matters more than anything else. If you’re in a situation where your parents might kick you out of the house, you should not come out.” He acknowledges that this is controversial advice. “But there are way too many homeless LGBTQ kids. Part of me is exhausted from fighting this fight for so many years. In the positive, things are changing, but there is still much work to be done.” 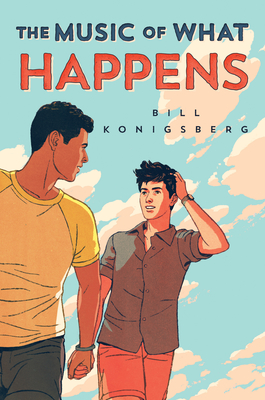 In his newest book, THE MUSIC OF WHAT HAPPENS, the heroes, Max and Jordan, are comfortably out, but neither has found love–until they meet each other. This book marks a shift the author didn’t understand when he began it. “My default is that I had to deal with them coming out, and it was so freeing when I realized, no, not necessarily. Maybe these are kids whose biggest issues are past that.”

Konigsberg, an audiobook lover, appreciates emotions in his listening. His latest favorite is Benjamin Alire Sáenz’s LAST NIGHT I SANG TO THE MONSTER. “It took me about 15 minutes to get into it, and I sobbed the last two hours.”

Konigsberg feels he learns through hearing, and, because of that, audiobooks hit him powerfully. He hasn’t liked listening to his own books read on audio. He once listened to one on a drive from Phoenix to Los Angeles. “There was too much me in the car. I was overwhelmed with how exhausting it was to be around me! My brain doesn’t stop, and listening to my audiobook was like being in my brain. So I’m not planning to do it again.”

Happily, others who listen to Konigsberg’s audiobooks don’t feel the same way.