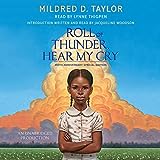 In 1990, I discovered Mildred Taylor’s Newbery-winner “Roll of Thunder Hear My Cry” (Dial), a book which has just re-released with new cover art and an introduction by Jacqueline Woodson. I spent that summer reading all eight books about the Logans. Summer is the perfect time to feed a child’s love of reading, introducing them to new authors that will feed into their love of books – or perhaps spark that love. Whether you head to the library or the bookstore here are some books that are worth steering your child toward this summer.

Two series come from Bloomsbury’s Read & Bloom. Adele Griffin’s “Agnes and Clarabelle” features episodic short chapters in which a pig (Agnes) and chicken (Clarabelle) calm each other’s fears as they adventure through all seasons.

Rita Williams-Garcia creates an incredible new character in “Clayton Byrd Goes Underground” (Amistad, ages 8-12). Clayton adores his grandfather, Cool Papa Byrd, and wants to be a “bluesman” like him. They also share a comforting ritual as Clayton’s grandfather reads him to sleep. When Clayton wakes to discover his grandfather has died, life changes quickly and dramatically. Clayton’s mother, who doesn’t love the blues or her father, rids their home of records and guitars Clayton wanted. In trouble at school and miserable at home, he runs away to seek musical connections, but trouble finds him first. Williams-Garcia portrays Clayton’s quiet grief in a way that feels honest and poignant.

Dana Alison Levy’s 12-year-old Sara Johnston-Fischer narrates “This Would Make a Good Story Someday” (Delacorte, ages 8-11). Sara planned a reinvention summer with two friends until one of Sara’s two mothers won a trip and drags her crosscountry by train. Sara’s traveling with her loud, animal-loving younger sister, an activist older sister and an annoying friendly boy. En route, Sara quotes “fun facts” and relates “not fun facts,” pictures the characters they meet and relates her reactions to all that’s occurring around and inside her. Levy’s written two other rollicking books about the Fletcher family.

Gail Carson Levine’s latest fantasy, “The Lost Kingdom of Bamarre” (HarperCollins, ages 9-12), is narrated by 15-year-old Peregrine. Peregrine has always been proud of her noble Lakti heritage until a fairy clues her in. She was stolen as a babe from Bamarre and needs to end a curse. Perry struggles to understand the deference and discouragement of the downtrodden Bamarre and the haughtiness and prejudice of the Lakti. With the help of magic and a best friend, Perry finds her strengths and confidence.

Chapel Hill author Sarah Dessen has a gift for writing fast-moving, teen-accurate romances. Her latest, “Once and For All,” (Viking) finds witty 18-year-old Louna jaded by years of aiding her mother, a wedding planner extraordinaire. But she can’t solve the problem of her own hurt. In interspersed chapters, Louna tells of one perfect night she’s spent with a boy who’s soon killed in a school shooting. Louna quickly rejects the wealthy, spoiled Ambrose. Readers will see his crushing despite Louna’s disdain and distancing. This engrossing Dessen romance has emotional depth that will thrill faithful fans and send new ones seeking dozen of others.

Megan Whalen Turner adds to her Queen’s Thief series with a standalone novel, “Thick as Thieves” (Greenwillow, ages 10-14). Familiar characters appear, but readers will be engaged by her new hero, Kamet. Kamet is an invaluable slave who is well-versed in languages, literature and record-keeping. His ambitions for power go awry when a warning makes him change course. He is suddenly charting his way through foreign lands with a mysterious Attolian who may be captor, or may be companion. No one enlivens lands and people like Turner. I envy new fans who can read the entire series.