Dennis Nolan’s THE HUNTERS OF THE GREAT FOREST – Guest Post

I’ve had the great pleasure of getting to know Dennis Nolan each summer at Hollins University as he spends time here with fellow MFA in Children’s Book Writing and Illustrating Professor Lauren Mills. Dennis is old school, one of the golden age illustrators. He knows everybody in the business, teaches the up and coming at Hartford University, and inspires the rest of us with his impeccable skill and story-telling sensibilities. I’m thrilled to have him on today to talk about his latest picture book, the perfectly wordless THE HUNTERS OF THE GREAT FOREST. Take it away Dennis!…

During the long process of mental wandering and rejected story ideas in my sketchbook, the idea for the Hunters of the Great Forest happened, as most of my picture books, as a complete and instantaneous thought. I scrawled it out across a single page storyboard before I lost the narrative as it played out in my mind like an animated film. The final very much resembles my very first rapidly drawn conception, yet only after many frustrating attempts at putting together a story that felt complete and rounded. Constructing the book, designing characters and architecture, deciding on the particular bird to use, experimenting with a palette of colors and whether to use pen and ink or pencil, took considerably longer than the flash of inspiration that revealed the story. With the storyline in place, I began the process of discovering who would populate the great forest, at first trying human like proportions, but after many versions, settling on inch high hunters composed of spheres and spindly legs that were a bit more insect like and allowed for gestures and postures that would add a humorous component to their character. I drew many hunters, young, old, male, female, heroic, and silly, before choosing the ones who would take the long journey into the giant trees. Keeping their personalities, costumes, colors, extra gear and weapons, distinct and unique helped to propel the action and enliven each illustration. I filled a sketchbook with designs of characters, toads, birds, ants, and mushrooms. 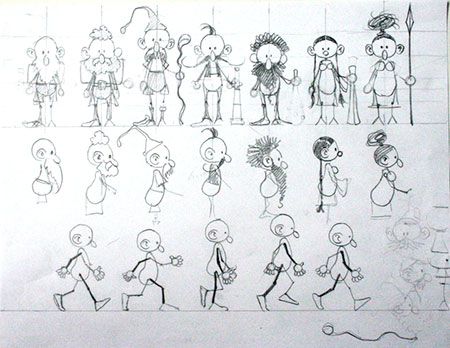 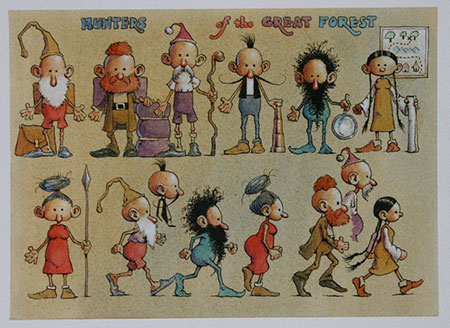 I drew compositions with trees and rocks from a bird’s eye view to an ant’s eye view until I had exhausted the possibilities. And when my vision was finally taking place, I began the process of collecting reference. 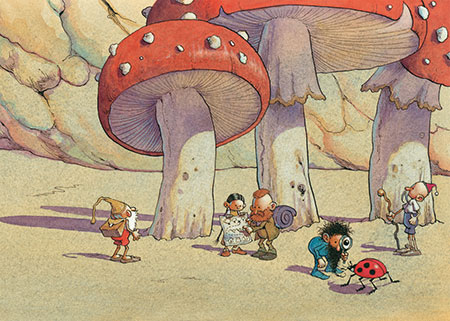 I spent hours in the woods, taking photos of tree roots, branches, and holes where nests might be built. Rocks and the muddy bank of a creek, for a rejected picture of the hunters crossing the water, were photographed from many angles. I built inch high hunters from wire and polymer clay and they were set among the landscape for scale helping me to envision the final images. I sculpted each hunter again in clay, at considerably larger than one inch tall, so I might understand their anatomy and proportions, but in the end had to be realized through gesture drawings and quick sketches. 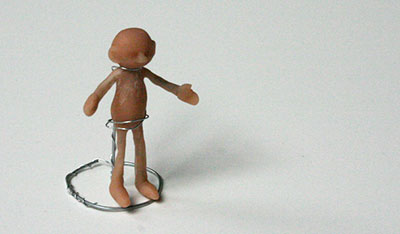 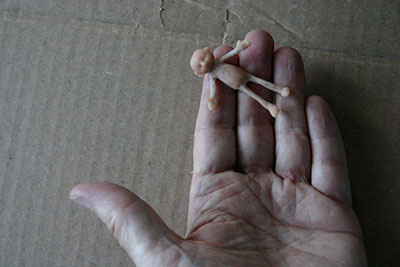 A village was built to scale using foam core and set in the sun to check perspective and shadow, drawing inspiration from storybook and cottage architecture, with quirky details to be added at the drawing stage. 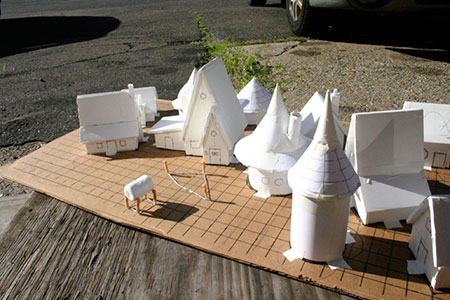 After I built the village to scale using foam core and set in the sun to check perspective and shadow, drawing inspiration from storybook and cottage architecture, with quirky details to be added at the drawing stage. The particular challenges of telling a story in pictures, without a single word of text, called for each character to project emotions which could be clearly read, as well as the building of suspense and dramatic surprises and conclusions through the use of extreme perspectives and telling details. 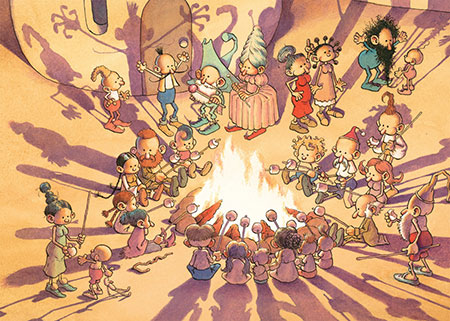 All the reference was finally combined in pencil drawing that included not only all the characters and the landscape, but the values of the light and shadow as well. It was then that I experimented with the final look of the paintings, finishing a number of pages using different media and different palettes of colors. I tried black and white, sepia, full color, graphite, and colored pencil and wash before settling on pen and ink and watercolor. The choice felt right for the kind of story I was telling, with action, suspense, humor, and comical personalities. 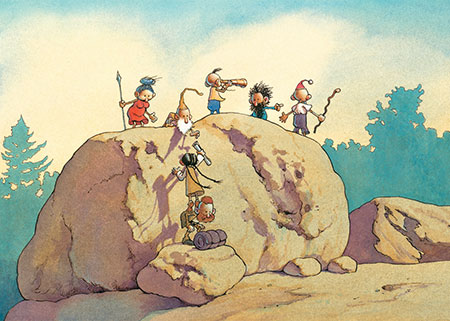 I used a dip pen and dark brown acrylic ink for the line work on watercolor board over my initial pencil drawing. The pencil was then erased and the entire picture received a wash of raw umber watercolor. This was followed by a wash of raw umber and ultramarine blue to take advantage of the granulating effect of the pigments. Some of the pictures required additional washes of yellow ochre or burnt sienna to set the groundwork for trees or rocks, or a blotting out of color for clouds. When all of the paintings were at the same level of finish regarding inking and background washes, I began the detail work of the hunters and their costumes, mushrooms, tree bark and rock textures, the dragonfly, toad, tufted titmouse and chipmunk, using concentrated watercolor washes and a few touches of colored pencil. The fairly unified background and the violet shadows bind the book together as the hunters move from early morning to night. 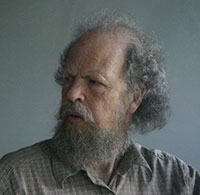 After trying a number of fonts for the display type I decided on hand lettering that also added to the overall character of the book.Me: And we’re fortunate to have the lovely results! THE HUNTERS OF THE GREAT FOREST feels like a classic to me along the lines of Chris Van Allsburg‘s JUMANJI, James Gurney‘s DINOTOPIA, or Maurice Sendak‘s WHERE THE WILD THINGS ARE. Check it out and I know you’ll love it as much as I do!